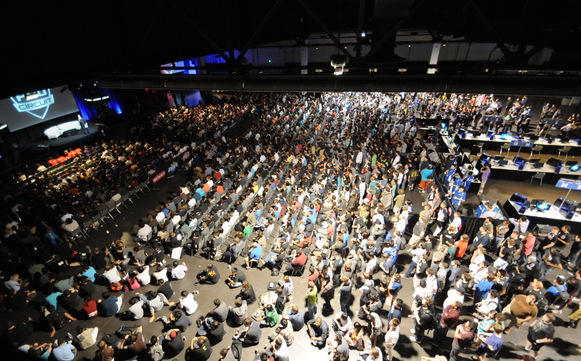 Meeting people, getting inspiration and having fun; the gaming industry is full of interesting events. Here is a list of the ones on our radar through next Summer. Let us know which ones we’ve missed or any anecdotes you have from any of the below events.

Mobile developers who read Steel Media’s Pocket Gamer and 148 Apps should check out Steel’s event on mobile gaming in London on January 13-14. 1,000 mobile game folks are expected to attend the central London event and they’ve got an impressive line-up of speakers ranging from King to Chartboost. Register here.

London mobile gamers shouldn’t miss MGF (January 20-21).  More than 20,000 attendees made up of “games industry professionals, who are shaping strategy and revolutionising the landscape” are expected.  And, to kick it off is an opening party in the iconic Gherkin building!

Designers, developers and artists from over 500 sites are welcome to make games during the Global Game Jam. It kicks off on January 23, 2015 and goes for ~48 hours.

Sites are added here. The theme for the jam will be decided and communicated on Friday, January 22, 2015.

Publishers and developers focused on everything from indies to AAA’s put their best foot forward with unreleased games and hardware at this event in San Antonio, Texas on January 23-25, 2015. Overflowing with game innovation and new stuff this event kicks off PAX’ events for the year. The premier casual gaming event returns to Amsterdam from February 4-7 at the Beurs van Berlage. Loads of speakers have already confirmed. Spil Games is a sponsor this year and we’re looking forward to meeting up and hearing about industry trends. And, the famous Gamepoint party.

Indie game developers can soak up the latest trends and get hands on experience via lessons, talks, panels, workshops and exhibits at IndieCade East. Taking place in New York City at the Museum of the Moving Image from February 13-15, 2015.

The largest gathering of professional video game developers will take place March 2-6, 2015, as always at the Moscone Centre in San Francisco. In addition to the panels, lectures, and networking taking place, the 52-hour Game Jam Train will return! Check out the official site here.

Running concurrent to GDC San Francisco is the Game Connection America event. Game professionals can network at the event taking place at the City View at METREON. Go to this link to the get the latest news on the event.

Indie developers tired of flash and glamour at game events should check out EGX Rezzed (March 12-14, 2015) in London. This event plans to embrace “the independent spirit of modern game-making” with a focus on indie titles through a playable show floor line-up, developer sessions and surrounding activities. Bargain prices start at £13.00 and the event is at the Tobacco Dock in London. “Nerds, rock-and-roll hippie freaks, and business suits” all converge in Austin for SXSW. Last year Lady Gaga was the keynote speaker. Game developers, execs and enthusiasts shouldn’t miss the gaming arm of SXSW held in Austin, Texas from March 13–15. You can see new hardware and accessories for mobile gaming, live game demos, and people dressed up as their favorite gaming characters. Check out Austin Chronicle’s summary from last year’s event.

App developers congregate in Berlin this Spring for tracks dedicated to the app ecosystem and mobile gaming. Taking place in Berlin on April 22-23 at the CityCube Messedamm. Get tix before  December 19, 2014.

Game developers from all around the world will showcase their work at the A Maze event in Berlin from April 22–25, 2015. Submit a game to the A Maze awards and win up to $3K in prizes. If you care about the casual game industry in Asia keep this in your calendar. It’s too early to start seeing speakers, but go here for some initial information. Happening on May 19-21, 2015 in Singapore.

Developers from the Nordics share lessons learnt and success stories from this well-regarded gaming region. The full list of speakers are still to be confirmed, but it’s already looking impressive with a programmer from Ubsioft’s Child of Light and Obsidian’s Creative Director scheduled. Registration details here. Happening in Malmö , Sweden on May 20-22.

More than 600 game development professionals will descend on Ottawa from May 24-26, 2015 where they can network and share best practices. Details TBD, but check out this video from last year’s event.

The big kahuna for all things related to video games and their technologies is, of course E3. It is in Los Angeles from June 16-18, 2015. Exhibitors include the likes of Disney, EA and Microsoft. Check out their site here. 3-day passes are $795.

Gaming industry professionals flock to MobileBeat to talk about the business side of mobile gaming. Next year’s event (July 13-14, Hilton Union Square, San Francisco) promises to focus on topics including personalized advertising, customer nurturing and mobile retail.  Mobile design and UX that contribute to growth are also on the agenda. Deadline to get speaking requests in is April 1, 2015. Android game developers can choose from more than 75 Android app development classes and development tutorials at this event in Boston on July 29-31, 2015 at the Sheraton Boston Hotel.  Register by January 16 , 2015 and pay $995 for registration passes.

Trends in casual gaming for 2016 will be topics of discussion at this event taking place in San Francisco on August 11-13, 2015. Watch this site for more details.