Developers: Tell Me About This Game 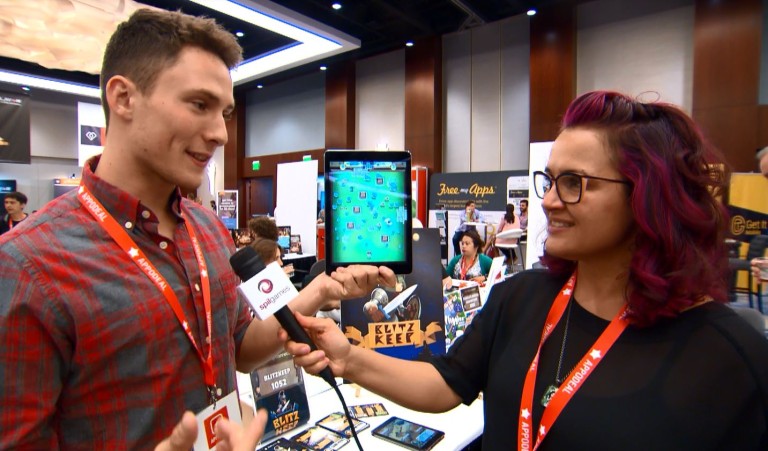 She met Will Delventhal who developed Blitzkeep. “You’re going to die a lot of times,” he told her of his game. “Each actual gameplay doesn’t last very long but it’s really easy to play the game for an hour.”

She also met Samuel Kolb who wants to make the world a healthier place with his game Habit Monster.  “Games have the power to change people’s behavior,” he explained. “What if you could use that power to make people healthier?”

Manas Gajare’s game Zabuza Magic lets you place magic tricks with your phone.  “Every kid wants to be a magician,” he said as he demonstrated the app.

Fliggles Rescue Adventure needs players with a heroic streak.  “In our game the music has been stolen,” explained developer Jeff Hester, “so we’ve got to have a hero.”

Every day is a new experience with Ronald Mannak’s Pigu’s Polar Puzzle.  “I’m pushing three new puzzles every day,” he said. “Tomorrow there will be different puzzles.”

Olaf Morelewski’s game Magic Flute is based around the opera.  “We have 32 levels,” he said. “Each level introduces a story from [the opera’s] libretto.”

At Spil Games, we’re always talking with innovative developers, playing new mobile games, trying to find the best to take to the next level.  This is part of our Unsung Heroes Initiative to get people playing a wider range and to find an audience for awesome mobile games.