Your favorite cow has been kidnapped by aliens and now you need to build a rocket.

Developers entered more than 300 mobile games they believed deserved a better chance into the Unsung Heroes Competition. In July, we whittled the entries down to the best 22.

Over 6,000 people voted on PocketGamer.co.uk for their favorites of the 22. The huge response confirmed what we already knew: although these games disappeared into the black hole of the app stores, they are all well worth playing.

And top of the pile for the public was Astro Run — Endless Fun from Simbite, available on Apple and Google Play. The developer of the public’s favorite game wins an iPad.

“We’re cock-a-hoop to be the playing public’s favorite,” says Simbite developer Grzegorz Reglinski. “The Unsung Heroes Competition has been an awesome way for us to raise the profile of our game with players and ensure that more cows can be rescued from space.” 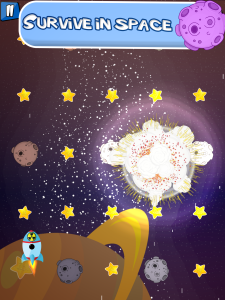 Commenting on behalf of Spil Games, which organized the competition, CEO Tung Nguyen-Khac says: “I’m delighted the public voted for such a fun game. I’m sure this will give Astro Run the impetus it needs to jump to the next level. I congratulate Simbite on its success with mobile game players.”

The competition continues. Although Astro Run took the public vote, it is just one of several games still in the running for the main prize — a publishing contract with Spil Games worth up to $50k. Spil Games’ own judges will make that decision, but they promise to take the public’s love of space cows firmly into account.

Spil Games is a publisher and distributor with over 100 million monthly users. It uses this huge audience to reach beyond the app stores in marketing to mobile gamers.

Details of the semifinalists can be found here.

An insight into the other Unsung Heroes Competition entries can be found here.

The Unsung Heroes initiative was launched at Casual Connect in February. Developers pitched their games and explained the challenges in finding an audience through the app stores. A film of the event can be seen here.

The Unsung Heroes Competition was launched in April to help developers tackle the problems of finding an audience for their games and to highlight to users that there are many great games outside the app store featured lists. More than 300 games were entered into the competition.

The prize for the winner is a publishing contract with Spil Games worth up to $50,000. Spil Games will apply its marketing know-how, monetization and localization expertise, and its analytics tools to give the Unsung Heroes winning game the boost it deserves. Cross promotion with other Spil Games products will expose the winning game to a potential audience of more than 100 million.

The final winner will be decided by judges from Spil Games who will take the public vote firmly into account.