How to give awesome mobile games the chance they deserve

People are already getting behind our Unsung Heroes campaign (it officially launches at Casual Connect in Amsterdam on 4 February 2015).

Over the past nine months, we’ve shifted our focus to mobile gaming and very quickly we noticed something strange was going on. Some great games —some really great games —are being overlooked.

At Casual Connect Europe (Amsterdam, 4 –6 February 2015), we’re launching Unsung Heroes with an event where developers will be pitching their games —the ones they think are awesome but which didn’t get the attention they deserved first time round. We’ll also be playing the games and talking about the issues developers have with marketing for mobile. We hope you’ll come along and join the debate.

For us, it is more than a one-off event. It is a campaign to get great mobile games the attention they deserve. With your help, we hope to continue the conversation about how we get more people playing these great games. 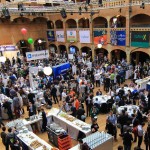 Other stories about Unsung Heroes