How This Indie Developer Fixed his Game by Doing Nothing 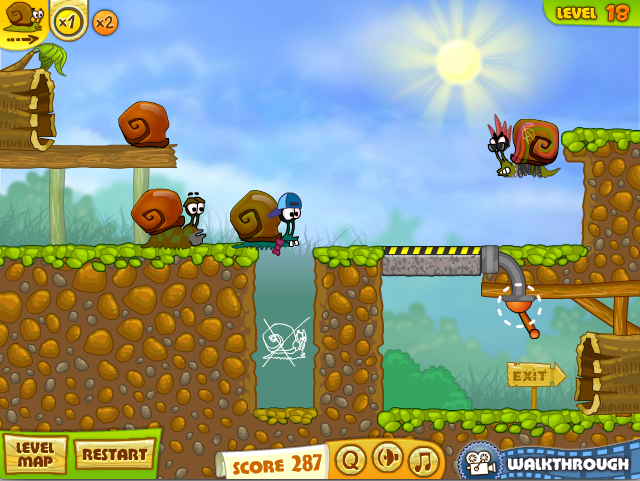 Hunter Hamster’s HTML5 game Snail Bob gets around 1 million game plays a month. But, Andrey Kovalishin, a co-founder of Hunter Hamster doesn’t have time, staff or much interest to spend time thinking about that. He’s already hard at work on his new project: Snail Bob 2 for all mobile platforms, PC and Mac.

“As an indie developer my heart, passion and time goes into designing games. Handling the marketing and analyzing every single piece of player data isn’t my thing. Usually I don’t even have the time for it. I rely on partners for that. Once the game launches I’m already back in my home studio thinking up the sequel or a different game concept.”

The other week Google unveiled a new version of Chrome (version 36). Chrome is used by 750 million people and is a popular browser for HTML5 games. Among the updates in Chrome version 36 was a change to its Web Audio API. Unfortunately, the names of audio methods in the Web Audio API within v36 were not made backwards compatibility from v35. As a result, the audio wouldn’t play in HTML5 games like Snail Bob. This broke the games, causing them to issue a Fatal Error message and stop loading. It was impossible for players to play these games and developers like Andrey stood to lose millions of game plays.

Andrey’s HTML5 games are published by Spil Games. Right after the new version of Chrome came out the company started seeing issues with the HTML5 games it publishes.

“Our Q/A guy was the first to spot an issue when HTML5 games he had just approved for publishing started to crash,” said Ivo Teel responsible for the Gaming Platforms at Spil Games. “Meanwhile the comments sections of Snail Bob and other HTML5 games in multiple languages started to highlight that the games weren’t loading.”

The issue wasn’t totally clear, but with close to 100 games likely to be affected the company knew it needed to move quickly.

They started searching forums where their suspicions about the issue being related to the audio API were confirmed. Google issued this list highlighting the changes in the audio API. And, luckily a fix quickly appeared from Chris Wilson.

“To save us and the developers time and money we implemented the overall fix within our API which instantly fixed the issue for all affected games,” said Teel. “This scalable approach worked out perfectly and the games were loading fine again minutes after we updated our API. All of this happened within a few hours from when we discovered the change to the Web Audio API in Chrome. Because we were able to act quickly we didn’t even need to involve the game developers.”

“I actually didn’t even know about the issue until Spil Games zapped me on email to let me know they had solved it!” laughs Andrey. “I wish all my problems could be solved this way”!

Teel concludes, “This issue wasn’t a complete surprise because the audio API we were using was pre-fixed and thus in BETA. Using pre-fixed APIs can be a great way for developers to benefit from the latest advancements in HTML5. But, they need to implement it with care knowing that –as was the case with the Web Audio API—the standards can change with time which can lead to unexpected issues. That’s why we like to build these right into our API so we can get fixes out that save the developer the time and money of making the change themselves.”