For Android, you should enter your project ID as the value of the “ProjectId” field in Spil.cs. Ask your Spil contact to provide you with your project ID.

There are two modes in which you can use the Android Spil SDK. The older method, using the “.aar” file, and importing the SDK file automatically using the “mainTemplate.gradle” file. These setting can be configured, as well as which modules you want to use in the “SpilSDK->Configurations->Android” Unity window located in the top menu.

The modules are broken down into the following sections:

**Important**
Besides the modules, there are also two manifest files which should be used only if you are using either the Unity Plugin “Prime31” or “Android Native”. You should especially look at the main activity name value.

When you use the supplied “mainTemplate.gradle” and the Gradle Build System, the Google Play Services and Google Play Games will be automatically imported and you don’t need any additional “.aar” files. If there are any conflict errors make sure to remove any redundant file and use the Gradle file system.

For Android version 6.0 and up, Google requires that with all your Android application, the permissions that they consider as dangerous (see: https://developer.android.com/guide/topics/security/permissions.html) need to be asked at runtime. As of the Spil SDK version 2.7.0+, there are no dangerous permissions required anymore. In case you require have dangerous permissions, please discuss this first with your account manager. After agreement the following steps can be taken to implement a correct permission flow that will be approved by the Google review team:

You can manually request a permission using the following code:

If you want to set your own custom notification icon, you can do so by adding the appropriate image file to the following location (if does not exist, you will need to
create it):

For Unity 2017.1 and above you can use the supplied project found in the SDK bundle under NativeLibraries/Android/Resources. Build this project in Android Studio and make sure to replace the necessary images.

Additional settings can be configured via the “Spil SDK -> Configuration -> Android” menu, the page looks like this: 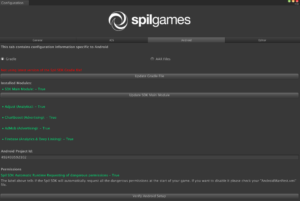 It allows switching between using “.aar” files or the recommended Gradle build system. After selecting the build system it’s possible to add or remove modules, based on which features your game requires. The screen also shows useful information such as recommended updates.

Extra components for iOS need to be added in Xcode after building from Unity.

WebGL is similar to Android with a few minor differences:

For iOS there are no other steps to take, the Spil postprocessor script takes care of all the building and adding the Spil frameworks to the project.

Split-application binary for Android (APK + OBB files)
When a Unity app becomes large in filesize it may be a good idea to split the app up into multiple parts. This way the initial download and install of the app from the app store is quick and the app opens up to show a “downloading assets” screen. The app then downloads all the other assets before continuing.

Unity supports this feature via the “split-application binary” build option, which splits the app into an APK file and one or more OBB files (see: here). By default the APK file contains only the starting scene of the Unity app and all of it’s required resources (including the “Plugins” folder).