Unsung Heroes: player co-creation is the secret to winning for Yellow Monkey

Shailesh Prabhu, founder of Yellow Monkey, presented his puzzle game, Socioball which everyone agreed was smoking.   We dashed a ball across the game’s quadrilateral of tiles where the minimalistic design and soothing colors hooked us. We cheered Socioball’s ‘socio’ element as we created and shared levels via Twitter. 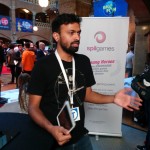 Shailesh won an iPhone for his pitch which convinced us Socioball was the Unsung Hero game most deserving of greater player recognition.

Unsung Heroes is more than a one-off event. It is a campaign to get great mobile games the attention they deserve and haven’t gotten first time around. We plan to keep the discussion going through the year about how to stop great games disappearing from view in the app stores.

“As indie developers, it’s a constant struggle to be seen on the crowded marketplace and to get people to buy the game,” says Shailesh.

Allowing players to co-create game content is his strategy to stand out in over-crowded app stores. “Players feel accomplished and become more engaged when the levels they created are played,” he explains. “The more people who create levels and share those over Twitter, the more we create awareness of the game on social media.”

We’ll be spreading the word with a video based on the discussions that developers had at Casual Connect. And we’ll continue to promote Unsung Heroes with more initiatives and other events.