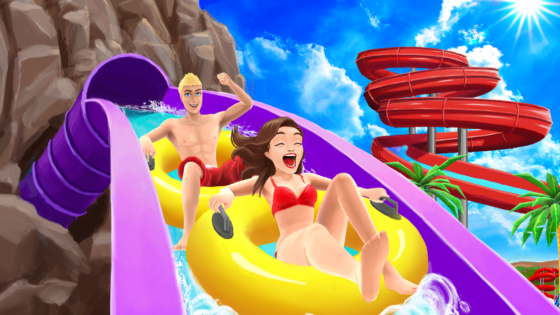 We recently came across a unique game titled UpHill Rush that was launched on iOS platform and got in touch with the developers of this fun game. Here is our interview with Spil Games, where we get an in-depth glimpse at this game and some interesting aspects of game development:

Tell us a bit about your game and what was it that inspired you to make this game?
I’m a big fan of water theme parks. I try to visit as many as possible during my summer holidays in all kinds of countries. When I was inside one of those cool slides around 10 years ago, I thought to myself, this feeling is so awesome, maybe I can turn these slides into a game.

The first Uphill Rush was created as a 2d web game and has been played more than 1 billion times.

As part of our strategy to reimagine the best of our web games for mobile devices, we created the game in 3d for Apple and Android. This allowed us to make the water slides even cooler. The mobile version of the game was published in early 2017 and has been installed 43 million times and counting.

Naming a game is almost always one of the most difficult tasks since that’s what people identify it with. Was this name the first choice for the name? If not then what were some other options you were looking at?
We created the web game 10 years ago when there were still good names available.

I got the word Uphill because as we were designing the levels, the slides sort of looked liked hills that were going up and down. Rush was added because I wanted the player to feel the speed when going on the slides.

The artwork of this game is simply gorgeous. What sort of thought process went behind that?
We wanted the game to feel exactly like a water theme park. I had over 10 years of pictures from all the water theme parks that I visited. These pictures inspired us to create a new water theme park that people would love.

What was the major challenge in developing this game?
Getting the difficulty curve right for the levels. Our initial levels were way too hard to win. We did many user tests where we learned points in the level where the player would fail. We created a smart system that allows us to see all the parts in the level where users fail. This allowed us to tweak the levels and find our way to the right difficulty curve.

Any in-game secrets that could be easter eggs for players to discover?
Check out some of the funny vehicles in the ride selection. There are vehicles in there that you won’t find in any normal water theme park.

Will there be any addition or exciting new updates for the game in the near future?
Almost every week we add new content to the game. This could be new rides, characters, tracks, modes, or game optimizations. We believe a game is never finished. There is always something to improve or something exciting to add.

How much time did it take to get this game developed and what can players expect in updates for this game?
It took us 6 months to develop the main mobile game. Then we continued to improve the game in the soft launch period for another 6 months. That adds up to 12 months of total production time before the game’s commercial launch. It quickly became #1 on iOS in 100 countries.

During the development process we were constantly challenging ourselves to make the game look better. We play the levels over and over and learn from every user test.

What are your future plans as a game developer?
We are constantly making new games. Our latest game is about a theme park and it’s called Thrill Rush. It features extreme roller coaster attractions with over 40 vehicles like a tank, or a skateboard and 25 funny costumes including a neon suit as well as that of a solder or a biker.

How long have you been developing games and what is the most enjoyable aspect of game development according to you?
I have been in the gaming industry for 15 years now. What I love most is when I have an idea for a game and the moment this idea comes alive in the game. This feeling never gets old.

How many people worked on the development of this game and any interesting dev stories?
Around 14 people.
A funny story:
When we created the first web version of Uphill Rush 10 years ago, the level designer said he had never visited a water theme park. So I took him to one. But he forgot to tell me something. He couldn’t swim! I had to grab him out of the water after every slide. I probably saved his life 3 times on that day. But he totally loved the slides.

What are your personal favourite games?
The Legend of Zelda: Breath of the Wild on Nintendo Switch.

Any message for our readers?
If you love water slides and love a summer holiday mood, then this is the game for you. Do you have the skills to make it to the finish line in this epic, thrill-filled ride?